Hi!
It's been a long time but as we near the end of term I have a bit more hobby time again! I have the pleasure if taking part in a small 8 man Kill Team day on Saturday and am spending the day prepping lists etc.
My list consists of 5 Sternguard with Sallies Chapter tactics (obviously) and a Rhino. 2 Combi flamers, Heavy Flamer and naked Sarge.
I'm a bit worried about the low model count, however I am hoping that their  versatility will make up for it.
I will post full pics etc later!
Posted by Unknown at 08:15 No comments:

Apologies for the lack of anything on the blog recently. Work sucks right now and my hobby time has been 0 hours in the last 4 weeks!
Expect a slew of posts during the October half term next month and the loads around Xmas (once I've finished work!)
Keep hobbling friends!
Posted by Unknown at 01:18 No comments:

Zone Mortalis (on a budget) Part 1

After listening to a recent episode of the Indpendent Characters, I downloaded a copy of the Forgeworld PDF rules. I was intrigued by them and fancied playing some games at my local gaming club. Unfortunately as I'm not lucky enough to be able to splash out on the lovely Forgeworld ZM tiles I went hunting for a suitable alternative and I found Battle Systems.

Battlesystems are a small company that specialises in producing printable PDF files that can be built with 'some' modelling experience on paper and mount board to produce good looking tabletop terrain. At a fraction of the cost of the ZM tiles, being modular and having the ability to reprint more sections if you need them I decided to invest in their Bumper Value Pack and Bunker wall set.

This should, in theory provide me with enough terrain for a 3x2 board with some interior details to use for ZM and possibly Space Hulk. Battle Systems are also currently developing more features for this system to make it larger and more detailed and seeing on how these kits go together, I will be investing further...

I'm off to get some mount board and glue - look out for updates soon!

It recently occurred to me that although I have been in the hobby just under two years, a far more important milestone is that my friendly local gaming group has just quietly celebrated its 1st Birthday!
Known as "Guildhammer" (due to our venue being the Gamers Guild in Redhill), our group has been through a first year of  ups and downs like most clubs, but has resolved into a core group that has made it a success.
This year has seen lots of people come in to see what's going on, some to take part in small introductory games, some who tested tournament lists and others who just want to throw some dice and chat over a 'friendly' game.
We've organised a Facebook group to keep that hobbling spirit going (although it's secret to hide our shame!)
Reflecting on our first year I decided on some areas that going forward I think we could improve on and drive it forward:
1) ADVERTISE! Drive word on the street up through advertising in our store and through other methods!
2) ORGANISE! Plan events to keep everyone (mainly those fair weather gamers) interested in playing regularly. We've got a few in the pipeline but creativity is key here!
3) THINK BIG! The sky is the limit and what's most important is that we utilise all the members creativity and encourage everyone to have a go at doing things they want like organising games or running campaigns!
So here's to getting the first year done and looking ahead to the difficult second album!
Posted by Unknown at 05:12 No comments:

Things to Do - My Kanban Flow Board

After hearing from both the Independent Characters and Deep Strike Radio about the benefits of using Kanban Flow to organise your hobbying, I thought I would give it a try. As my main problem is my constant painting ADD where I can't finish one project without getting bored and starting something else (check this earlier post to see the problem!) so this might help to keep me focussed and actually I'm quite proud of how much is done! 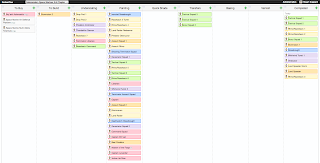 As you can see there is a definite issue with one column so this will be the focus for the next few months around work/life etc. If by Christmas there is a slightly more even spread to the columns than that will be huge progress.


Any advice below on how to stay motivated or tackle these problems would be amazing!


I think that this gave me the best mix of hard hitting armour and mobility so I could cross the board and try and get at least one combat squad into the bastion while holding onto my Comms Relay. We'll see how it goes!